Hotel lobbies are undergoing an exciting evolution. Architects, designers, hotel owners, and operators are re-thinking hotel lobbies and transforming them into active social hubs that are becoming the heart of hotels. With flexible designs, professionals are creating spaces that support work and play, dining venues and bars that morph throughout the day, communal tables with computers, library settings for quiet reflections, and game rooms for pure play. In many cases, the goal is to make the lobby as interactive as possible and to attract visitors and locals alike. In some cases, such as the Fairmont Washington, D.C., where ForrestPerkins renovated the public spaces, activated lobbies can translate into increased ROI. 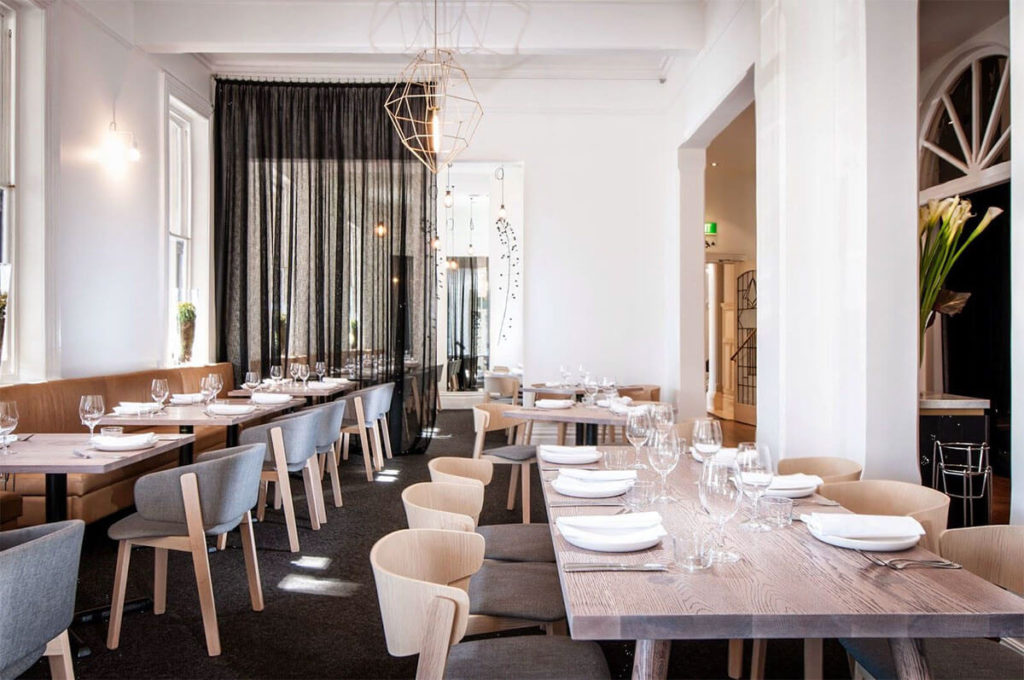 As architect and interior designer, ForrestPerkins approached the public spaces including the entire lobby, loggia, outdoor courtyard garden, and Kennedy Ballroom, which is directly beneath the courtyard, with a detailed master plan. To activate the lobby, a two-story space adjacent to the courtyard, it was important to create a sense of drama, and simultaneously provide intimate places to gather. ForrestPerkins drew inspiration from an aerial view of Washington, DC, an undercurrent that runs throughout the design, to create a sense of place for visitors. To enhance the guest arrival experience, the firm created a new entry vestibule with a revolving door, which also mitigates outdoor air intrusion, and redesigned the lobby as a dynamic, multi-functional space that includes a focal bar and a variety of seating options to maximize food and beverage revenue.

A sculptural mural inspired by an archival map from the early 1800s, provides the backdrop for the new sleek white marble and polished bronze reception desks. ForrestPerkins collaborated with Kevin Barry Fine Art to create this mixed-metal mosaic mural of the city of DC, executed in warm golden tones of brushed, polished, and satin metals of varying heights that suggest the density and vibrancy of the city. The major streets as laid out by the original city planner, Pierre Charles L’Enfant, are shown in bronze, as are the National Mall and the White House grounds. 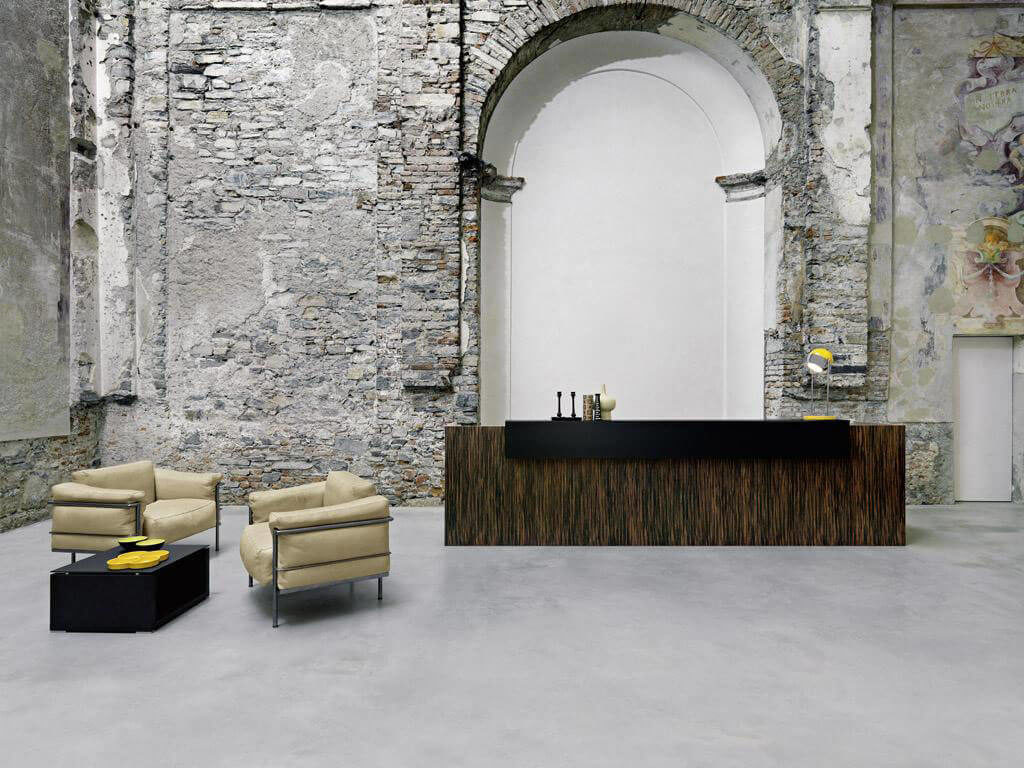 An essential aspect of the renovation was to make the courtyard a prominent feature by drawing the eye beyond the lobby and loggia from the moment a guest enters the Fairmont Washington, D.C. This led to eliminating the former varied levels and large built-in granite planters that created barriers to full utilization of the courtyard for social events, because the goal was to energize the lobby and adjacent courtyard and facilitate the flow from one space to the other.

The original lobby had three distinct spaces: a raised level that led to the registration area and to the guest elevators; a lower level that included lobby seating and a small indistinct bar crowded into one corner and overlooked by the mezzanine above as well as a glass-enclosed loggia that overlooked the courtyard. The most prominent features of the spaces were the strong architectural elements created by the original rusticated limestone cladding, an extensive grey-veined white marble floor with borders of taupe and grey, and accents of black that unified the upper level and extended to the loggia, and a prominent polished brass railing on the monumental stair and mezzanine overlook. The design team retained these strong architectural features and modernized them with the judicious addition of darkly-stained walnut and a variety of mixed metals that integrate the original brass as part of a carefully choreographed composition. Adding drink rails on three of the columns encourages guests to have a cocktail, relax, and linger.

Creating a sense of intimacy within the grand spaces was critical. To do this, ForrestPerkins used an array of elements such as strategically-placed area rugs and seating of different types, including high-backed wing chairs, ottomans, comfortable lounge chairs, banquettes, and bar stools, to provide a variety of experiences. The team also added screening elements to define the lobby lounge area, a dramatic, undulating chandelier that fills the upper space above the lounge with 1,500 geometrically-shaped, metal forms that create a play of shadows on the original limestone columns.

In the airy, glass-ceilinged loggia, ForrestPerkins added three sculptural chandeliers, asymmetrical bronze sconces, and cast crystal floor lamps, enhanced by architectural lighting. Adding a mobile bar in the lobby loggia that can be moved to wherever it is needed, also helped activate the space greatly.

The designers handled two challenges with one unifying element by using an acoustical sheer fabric to drape the glass wall separating the lobby from the porte cochere. This acoustical veil mitigates the disturbance of car lamps as well as balancing the noise reflection from the many hard surfaces of the space.

Drawing inspiration from the geometry of an aerial view of Washington, DC, the team designed three major elements to carry the theme throughout the new space. Beginning at the entrance to the lobby, they designed three large, handwoven area rugs executed by Tai Ping that depict the abstracted map of the nation’s capital and its iconic Potomac River in shades of brown and taupe with the water depicted in rich blues and deep greens. Interestingly, the meandering shape of the river appears to continue through the negative spaces between the rugs, allowing the mind to fill in the missing elements. Opposite the new entrance vestibule, the designers commissioned a stunning display table composed of polished and brushed brass and chrome interleaved with panels of hand-painted Portuguese tiles depicting prominent Washington, DC monuments and historic leaders.

The geometric forms of the classical monuments and federal buildings for which the city is famous inspired the unique undulating chandelier fabricated by Lusive, which is comprised of six different geometric shapes in various sizes and mixed metals that are individually suspended from the double-height ceiling as a focal point and unifying feature that begins over the monumental staircase and ends at the registration area. The shapes appear to float within the space, illuminated by small lights like stars randomly sprinkled throughout. This theme of geometry is carried through many of the pieces of furniture, carefully selected or designed to repeat the angled planes of the pyramidal, rectangular, and trapezoidal shapes of the ceiling elements.

The lobby lounge area is anchored on one end by a stunning elliptical bar with a screen of shimmering translucent squares of resin embedded with gold, silver, and copper leaf, executed by 3form, which surround the monumental stair. The opposite end of the lobby lounge is defined by a large U-shaped banquette, lushly upholstered and surrounded by a dark walnut back that serves as a space defining enclosure between the upper lobby and the lobby lounge and between the lobby lounge and loggia. The resin screen is repeated above the banquette to create a sense of separation from the upper lobby seating area. Walnut shrouds accented with bronze anchor the three columns that define the lobby lounge, doubling as stand-up drink rails, echoing the face of the bar, and giving guests a convenient way to relax, sip a cocktail, and linger.

The courtyard space, one of the largest in Washington, DC, was brought to one level to more easily accommodate events such as weddings, political, and social gatherings. During the spring, summer, and fall, the lushly-landscaped space is furnished with a combination of soft seating and dining and cocktail settings grouped around fire pits and a water feature. This gives people focal points and conversation starters while they’re in the courtyard. The design incorporates new planting and comfortable seating as an extension of the interior loggia, and the exciting water feature and exterior lighting to draw the guest toward the courtyard.

ForrestPerkins also transformed the Kennedy Ballroom, which had been an underused amphitheater, by leveling the floor and creating what feels like an abstract canopy of cherry blossom trees, into a beautiful ballroom. The cut work on the metal that creates this canopy creates a play of shadow and light, and this renovated space, one level below the lobby, is now booked for weddings, fashion shows, and various parties.

The color palette throughout the public spaces is also influenced by an aerial view of DC, but intensified to add more drama and sophistication to the space. The blue affiliated with water becomes more saturated like a classic power suit, or an amazing night sky. The green of the trees and parks shifts to be more emerald, and the neutral colors of the classic stone buildings becomes a bit warmer, like a glass of champagne. The textures of all of these fabrics are rich and inviting to encourage guests to sit for a while and enjoy the ambiance of the space with a snack or a cocktail or even for an impromptu meeting. The variety of seating options allow guests to choose their environment and accommodates individuals seeking seclusion while being part of a larger crowd or groups who want to socialize. The benefit of the space plan is that the entire lobby is energized throughout the day and evening.

We use cookies and similar technologies on this website to provide a personalized online experience. This includes targeted advertising based on your browsing habits. We also place and use cookies and similar technologies with our trusted affiliates and partners. We track and measure user behavior to improve our site, our services and provide interest-based content and adverts. By clicking „Accept All and Close“, you agree to allow cookies to be placed as well as if you continue to use this site. To get more information about these cookies and the processing of your personal data, check our Privacy and Cookie Policy.
Accept All and CloseCookie Settings
Manage consent

Marketing cookies are used to track visitors across websites. The intention is to display ads that are relevant and engaging for the individual user and thereby more valuable for publishers and third party advertisers.